We were very pleased with this idea! Forphilip’s 21st we made a cake themed on his favourite drink, and decorated it like a pint… Genius! 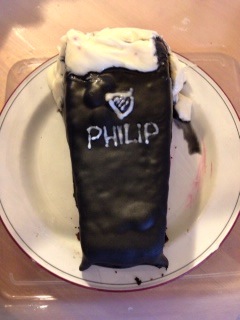 The basic recipe is by nigella and can be found here and we then filled it with black currant jam and decorated it with black icing, using the cream cheese icing (which in the original recipe was way too runny) for the head of the pint. It looked and tasted amazing, yay! I would definitely recommend this as the birthday cake of choice for the Guinness and black drinkers in your life… Ok so I guess that’s not many people, but it really is a yummy cake!

75g icing sugar (as often happens, I found I needed loads more than this. Make sure you’ve got plenty to hand, and keep adding it until it’s thick enough not to just slide off the cake!)

Whisk in the coca and sugar

Beat the sour cream with the eggs and vanilla

Add this to the Guinness mixture

Beat in the flour and bicarb

Pour into your greased, lined loaf tin and bake for 45 mins to an hour… Weirdly, even though my oven isn’t very hot, this was done after 45 mins

Use jam to help you stick the black icing on. You need to roll it out, but I find it tricky. For icing I use icing sugar to roll on… When this is for rolling black icing, the white sugar, which is hard to remove, ruins the effect. 😦

Ice the head of the pint with a little bit of cream cheese icing. Thinking about it, the proportions I gave were way too much for just the head. Make much less, unless you want to use it under the black icing, or potentially in the middle.

If you feel like it, you could use writing icing to make the symbol, like chris has.

It make a yummy, moist cake. My brother loved it.